Dear readers, some of the material discussed in this article contains obscene language. We have restricted using that language until after the section titled, “Background of the events”.

By Acton H. Gorton / CU-CitizenAccess — What began as a reaction to the news that University of Illinois students would have to attend class during sub-zero weather quickly escalated into a discussion of racism, sexism and white-privilege that will take place during the #ONECAMPUS forum on February 6.

It all began on Sunday evening of January 26 after Chancellor Phyllis Wise sent a mass email to students that campus would be open for business the next day. Angered by the decision, a handful of students took to venting their frustrations using the social media service Twitter. 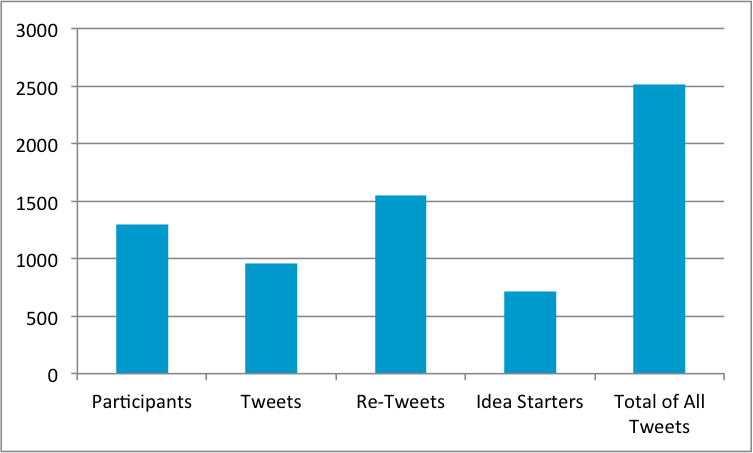 Within a little more than a day, some 2,500 messages — or Tweets — were sent through Twitter with remarks about the chancellor. The first sets of Tweets expressed frustration, but were soon followed by Tweets of anger, and then vitriolic racism and sexism. In response, a larger contingent of students took to Twitter in defense of Chancellor Wise against the remarks. They were soon joined by anti-racism and anti-sexism activists that use social media because of its ability to reach large audiences.

In an effort to understand how the nature of the conversation evolved, CU-CitizenAccess.org sought to identify the most influential communicators that participated in driving the discussion.

By counting the number of messages sent and repeated, CU-CitizenAccess.org identified individuals as Idea Starters, Amplifiers and Curators. This approach is described in a 2012 academic paper titled, ” Identifying Communicator Roles in Twitter“.

The approach provides an understanding of the discussion by tracking the spread of ideas throughout Twitter based upon the activity of Tweets and Re-Tweets. The paper describes the three major roles as:

Idea Starter:“someone who has their tweets retweeted by a large number of people – thus suggesting that their ideas are of value to share”.

Amplifier:“a user who is the initial person to retweet a tweet – one which is part of the retweet chain”.

Curator:“an individual who brings together conversations”.

The first step was to gather as many Tweets as possible during the event. Many times the Tweets can be short lived, as people will erase controversial comments from their online history. When that happens, it is very unlikely that they will be included in the analysis. In effect, what we see with this visual are the individuals that posted to Twitter’s public timeline and did not attempt to takedown or remove their commentary.

To qualify as an “Idea Starter”, the individual needed to be Re-Tweeted a minimum number of 50 times. This number was chosen because it provided the Top-5 most active individuals that fit the role of Idea Starter.

The graphic below breaks down the individuals throughout the discussion that fit the respective communicator roles. The names can be dragged with a mouse to see things more clearly.

Thanks to Mike Bostock for the design inspiration.

What we don’t see on the graphic are the people that participated in individual commentary or simply watched the events unfold.

If you want to explore or take a closer look at the individuals that participated in the conversation, CU-CitizenAccess.org used the TAGS Explorer to create a node-link diagram of everyone that publicly participated in the discussion. A node-link diagram looks visually similar to a hairball because lines are drawn between two different points in order to show a relationship. Click the image to load the website and get a closer look: 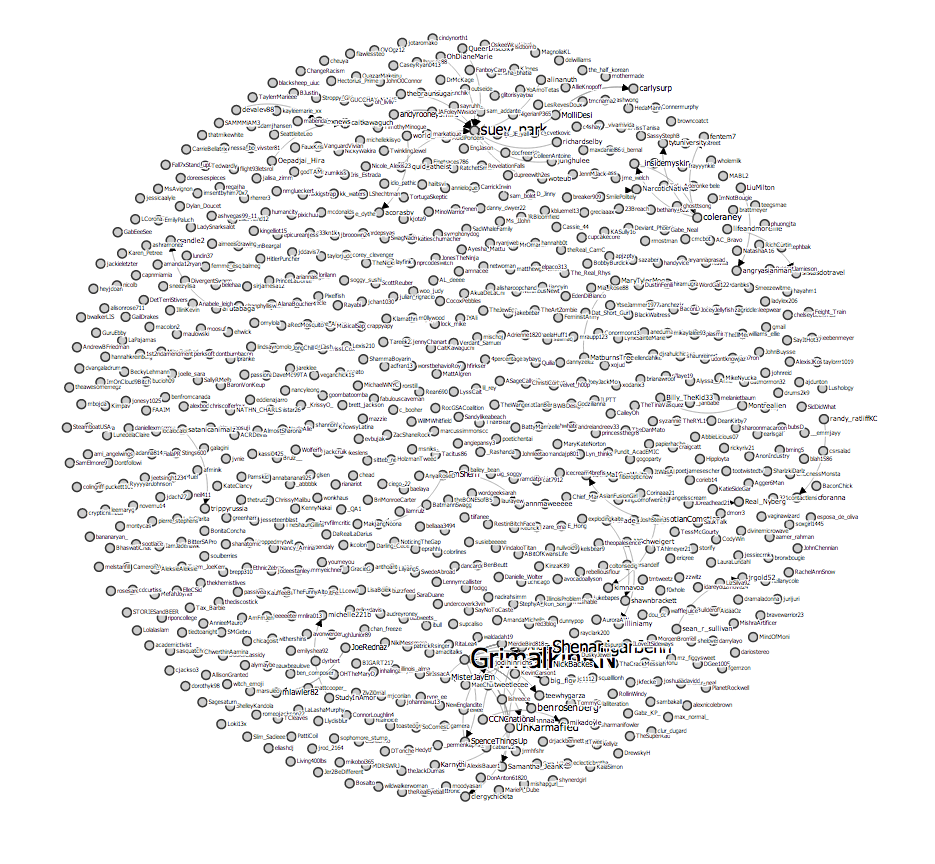 For a more in-depth approach to the Twitter discussion using social network analysis, take a look at Michael Simeone’s work on his blog. Simeone is a former University of Illinois researcher with the National Center for Supercomputing Applications. He now heads up the IHR Nexus Lab for Digital Humanities and Transdisciplinary Informatics at Arizona State University.

From the analysis, Simeone hypothesizes that there are some elements of self-interest, rather than reaching a consensus about who or what is right or wrong. Additionally, as Simeone puts it, there appears to be some preferential treatment for @suey_park.

These are the Idea Starters that were Re-Tweeted at least 50 times. Information about them was taken from their Twitter profile. 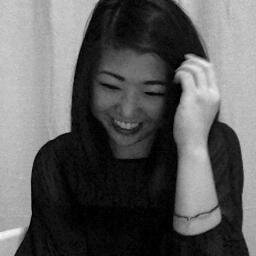 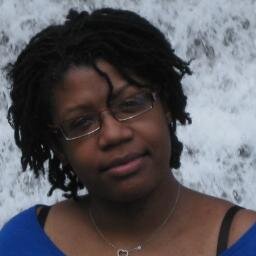 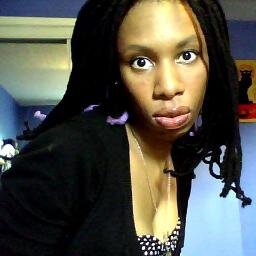 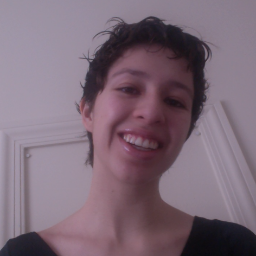 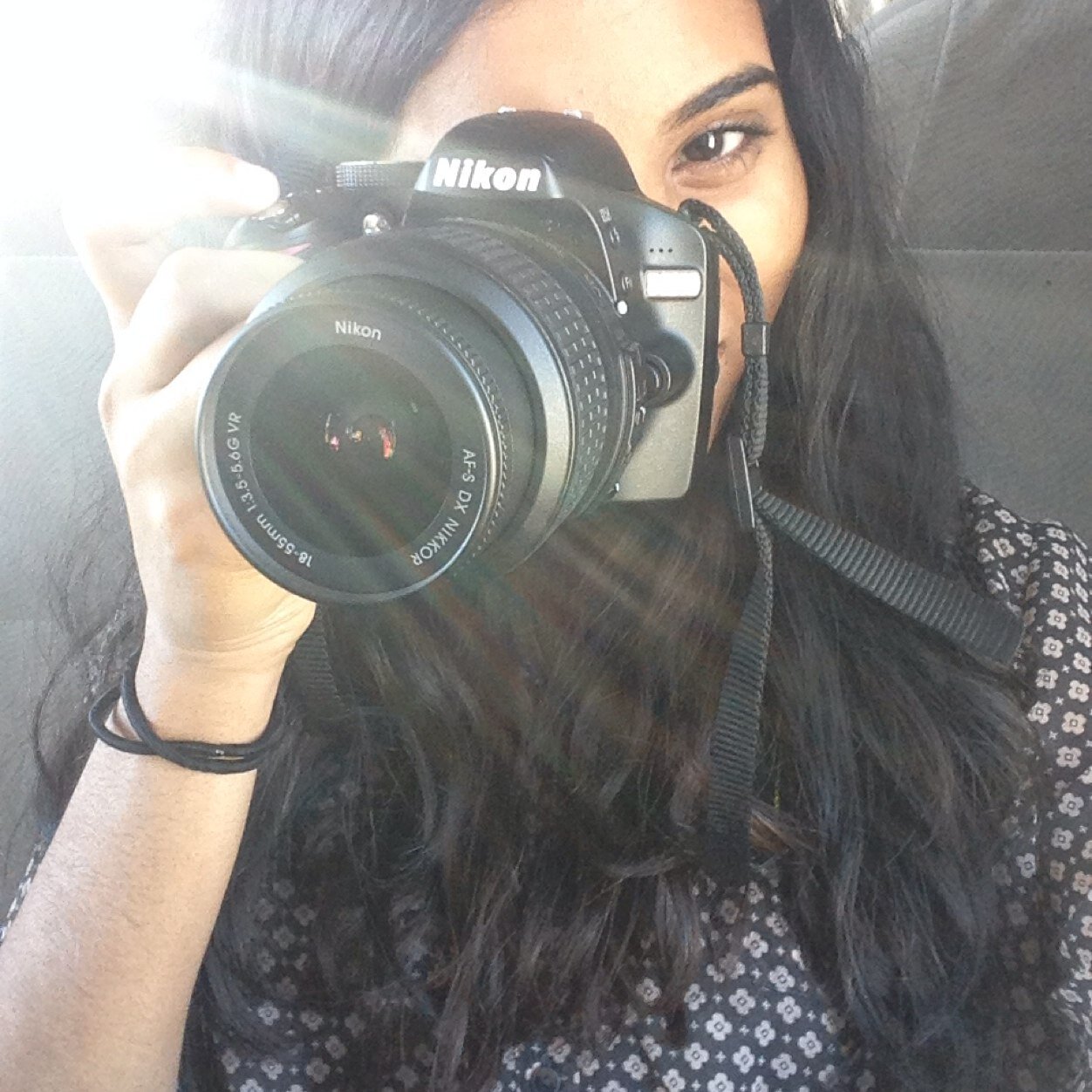 Hi, I’m Salma and I like warm hugs Illinois · instagram.com/sallmaq

Background of the events

Shortly after Chancellor Wise released the email announcing campus would be open amidst predictions for severe weather, a few students posted their frustrations towards the decision onto Twitter using the hash-tag, “#fuckphyllis”.

As originally reported by Buzz Feed, the messages began distastefully, but then shortly began to include racism and sexism as others joined in on the discussion. Some people posted to Twitter using an alias to obscure their identity, and they are responsible for the worst comments.

In particular, some imagery was posted of Chancellor Phyllis made to resemble an Internet meme.

A “meme” is a term coined to describe an evolving trend of some popularity on the Internet. Examples range from homemade movies capturing embarrassing moments, cute animals slowly waking up from sleep, self-made music videos that go wrong, to intentionally made images poking fun at something.

In this case, one student took a photograph of Chancellor Wise and added the words, “YALL READY FOR CLASS 2MA? … OR NAH?”

Chancellor Phyllis Wise is a successful academic leaderwho also happens to be an Asian-Americanwoman. Her academic curriculum vitae alone is 27 pages long; add another 8 pages for her administrative experience.

Activist Suey Park, a University of Illinois alum, who Tweeted and Re-Tweeted the most messages throughout the discussion, explained her approach to using Twitter in an article for The Washington Post titled, ” Suey Park: Asian American women are #NotYourAsianSidekick“. In the piece, dated December 17, 2013, Park describes starting a trend on Twitter with the hash-tag #NotYourAsianSideKick and what organizing around a cause on Twitter has the potential to do.

On the evening of January 26, nearly an hour and a half after Chancellor Wise sent an email announcing the campus would be open the next morning, Park picked up on the #fuckphyllis hash-tag and began weighing in:

Some students began to reply to Park, defending the hash-tag by saying that it was being twisted and the real problem is with dangerously cold weather:

@suey_park #FuckPhyllishas nothing to do with her race or gender. Some idiots take it too far, yes, but others are genuinely concerned

Then others join in:

Solidarity with @suey_park, #fuckphyllishonestly makes me embarrassed to be an Illinois student.

Hate having to go to school in the snow? Then skip class. But don’t attack a University chancellor with a fake Twitter account. #FuckPhyllis

Oh shoot I just pitched #FuckPhyllis as a story to my editors and took a ton of screenshots. *sigh* wish this could have been avoided.

And thanks the writer at Buzz Feed that covered the story…

The Tweet shown above sent to the Buzz Feed writer Rega Jha (@regaiha) is favorited by Tanya Chen (@Tanya_Chen), both of who have previously written about Park:

Common sense should tell any current UIUC student in the #FuckPhyllis that there are years of potentiall for horrible consequences ahead.

I knew @Karnythia was an alum and she inspired me to use social media for good, but I guess my classmates didn’t get the memo. #FuckPhyllis — Suey Park (@suey_park) January 27, 2014

Whoever thought it was a good idea to use social media to piss off me and @Karnythia must be stupid enough to promote #fuckphyllis.

So the Phyllis Wise Twitter account got deleted! This is a victory for all those fighting against the hatred of #FuckPhyllis — Andrea Garcia-Vargas (@AndreaGarVar) January 27, 2014

Discussion whether messages are driven by specific groups…

#FuckPhyllis = racism + sexism. And lets be real: You dont have to intend for something to be oppressive for it to actually BE oppressive.

This continues for some time…

Before things begin to wind down, Park’s posts to Twitter would be Re-Tweeted 269 times, ranking her at the top of the list:

An apology is issued

One Tweet stood out, asking followers if it would be better to shoot Hitler or Chancellor Wise.

“To all whom it affected, I apologize for my terrible and inappropriate tweet. Cold briefly shut down my brain” — Kelsey Bear (@kelsbear9)”

As of the publishing of this story, @kelsbear9 is the only student to come forward and apologize.