The deed of the former Hanford Inn & Suites is set to be granted to the City of Urbana this week, officials said.

Urbana’s city council unanimously approved the redevelopment of the longtime vacant and deteriorating Hanford Inn & Suites on Nov. 3 with a proposal to take over the ownership and then negotiate a deal with a new developer. 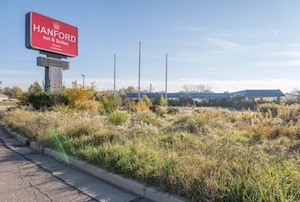 Click to see more pictures of the Hanford Inn

Under the proposal, the city plans to transfer the property to Kelly Dillard and Dig It of Champaign in exchange for the demolition of the building and the redevelopment of the property, which is at 2408 Cunningham Ave.

As part of the plan, the city will offer up to $300,000 in reimbursement costs to Dillard to offset demolition and asbestos removal expenses.

“The property is an extreme blight and detriment to the community,” said Elizabeth Tyler , Urbana’s community development director.

She expects the demolition will be finished by next summer.

The site is currently in poor condition. Though a “No Trespass” sign has been erected at the entrance, the building is only partially boarded-up and has signs of break-ins. What looks like bullet holes can been seen on windows at the north side of the building. Worn mattresses, broken television sets and other hotel items are abandoned on the parking lot where weeds have grown over a foot tall.

Tax records show the owner,  Mahendra Patel of MRK Management INC, has unpaid taxes of more than $315,000 since 2010, when the city forced the motel to shut down because of fire code violations. According to an Urbana city memo, the property has $1.6 million in outstanding mortgage and tax liens.

Patel could not be immediately reached for comment for this story.

Tyler said the owner has not responded to city requests and showed no intention to put the building back into use.

“We have proactively secured the property and taken legal steps to protect the public interest in the removal of this dangerous and blighted building,” she said.

In Urbana, owners are required to register their vacant properties to the city, and turn in either a demolition or a redevelopment plan within six months, according to city code.

“This will allow the city to immediately transfer ownership of the property to a private owner who can complete the demolition and position the property for redevelopment,” Tyler said.

The Community Development Services Department first sought redevelopment proposals in May, after some potential developers’ approaches.

“The site is in an excellent location at a major interchange,” Tyler said.  “It’s across from a very successful automobile sales center and retail center. We expect the site to be very attractive for commercial redevelopment.”

Dillard was the only buyer interested in the property. He recently demolished the former Gateway Studios Hotel on North Neil Street, which was closed down in May 2009.  Dillard and Dig It of Champaign will work with Realtax Developers, Ltd. in Bloomington to market the property, according to a city memo.