By Johnathan Hettinger/For CU-CitizenAccess.org — After making record profits from 2007-2013, farmers in Champaign County who rent their land are likely to lose money on both corn and soybeans in this year and next, said a University of Illinois economist.

Across the state, 2014 saw record highs for cash rent. In Champaign County, the average cash renter pays $253 per acre. 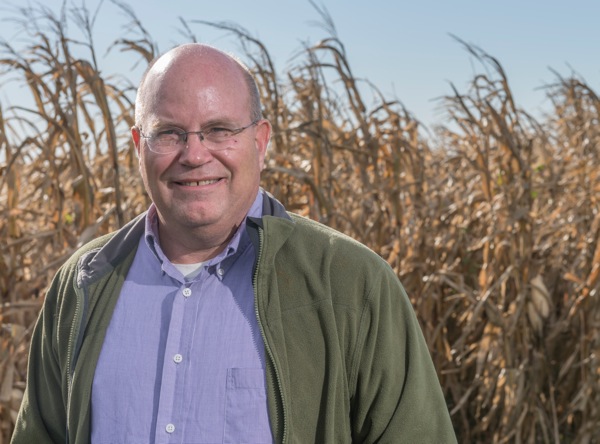 University of Illinois agricultural and consumer economics professor Gary Schnitkey poses for a photo on Oct. 17, 2014. Schnitkey projects the profit for landowners to be $245 per acre, meaning cash renters would lose an average of $8 per acre.

University of Illinois agricultural and consumer economics professor Gary Schnitkey projects the profit for landowners to be $245 per acre, meaning cash renters would lose an average of $8 per acre.

Cash-renters, or farmers who pay a certain rate per acre to rent the land they farm, make up around 40 percent of Champaign County farmers.

“We just saw the 2008, ‘09, ’10 through ’13 period where it’s just phenomenally good returns,” Schnitkey said. “Cash rents went up to get to that point. Now, we’re just looking for year-to-year, we’re seeing revenues come down a couple hundred bucks (per acre).”

Cash rent will likely decrease for the first time since the 1980s, but, for many farmers, lower cash rent won’t match the lower returns.

Further, he said, an anticipated record corn crop has driven the price of corn below $3 for the first time since 2006.

A strong soybean crop, coupled with the low corn prices, also has driven the price of soybeans to below $9 for the first time since 2007. And area farmers expect to see a decrease in revenue as a result.

In his research, Schnitkey projected that cash-rent prices will decrease between 9 and 14 percent in 2015. He said that he wasn’t comfortable projecting revenues past 2015 because there are too many variables.

Bev Ehler, a farmer near Thomasboro, both owns land and cash rents more land to farm. Ehler said she is anticipating at least a three-year downturn, and many farmers are beginning to react. Non-land costs are projected to decrease, as farmers will be less willing to buy new equipment or use as much fertilizer on their fields.

Ehler also owns a trucking business and fertilizer business, which she said will help her weather the downturn.

“There’s always going to be grain to move,” Ehler said.

She added that people who plant corn will need to fertilize their land, even if it is less so than in profitable years.

With corn prices staying low, the research of Darrel Goode, Schnitkey’s colleague at the University of Illinois, projects that it will be more profitable for farmers to plant soybeans rather than corn next year, but, with a 50-50 crop rotation, many farmers don’t have that option.

Schnitkey said he thinks more farmers will plant soybeans because it’s both less expensive and likely more profitable, but his research shows farmers will still lose money on soybeans.

The Federal Reserve in Chicago also said in September that farmers will likely explore extra storage for crops, so they are able to wait and sell their crops in a few months when prices are projected to be somewhat higher.

Schnitkey said the lower revenues will have an effect on the entire agriculture industry.

“The big thing that’s going to be coming up this year is we’re going to see reductions in revenue, so farmers worry that they’re going to have to cut cost and cut cash flows,” he said. “We’ve already seen reductions in machinery and equipment purchases. Now, we’ll begin to see seed fertilizer cost go down, and cash rent is going down.”