By Claire Everett/CU-CitizenAccess.org —  An ongoing struggle between the Monticello City Council and a citizen’s group has led to the city council being cited for violating the Open Meetings Act.

The attorney general’s office said the city council violated the act by holding a closed session in March that led to the creation of an advertisement criticizing four residents for questioning the city council’s actions and for filing numerous state Freedom of Information requests.

Maureen Holtz waits with others during an executive session to discuss redactions on March 11 minutes of a Monticello city council meeting on June 23, 2014. Photo by Darrell Hoemann/CU-CitizenAccess.org

The Public Access Counselor, Sarah Pratt, is a lawyer in the Attorney General’s office who works to ensure compliance by public bodies with Open Meetings Act and Illinois Freedom of Information Act regulations.

Pratt reported that during the March closed meeting, council members signed recommendations to create the advertisement called “Letter to the Residents of Monticello” that was printed in the Piatt County Journal Republican on March 27, 2013.

The citizen’s group, led by resident Maureen Holtz, has focused on concerns such as violations of OSHA and Environmental Protection Agency rules by the city and misuse of corporate replacement tax expenditures. 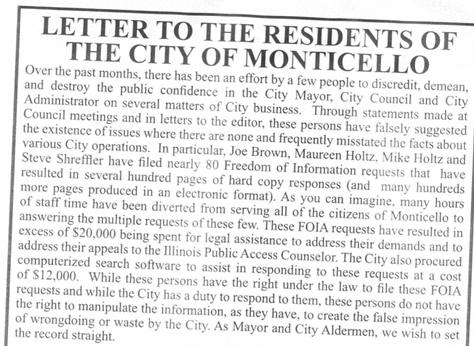 Response to request for meeting minutes

“Two weeks before the April elections last year, we were rather surprised to see this half page ad in which the entire city council and the mayor signed their name to it with their titles basically denouncing four of us,” said Holtz, who with her group started a website titled “Citizens for a Better Monticello” last fall.

The ad stated that over the past few months, there had been “an effort to demean, discredit, and destroy the public confidence in the City Mayor, City Counsel and City Administrator on several matters of city business.”

The ad named residents Holtz, her husband Mike Holtz, and residents Joe Brown and Steve Shreffler. It said there had been as many as 80 Freedom of Information requests sent during the past year.

A second ad challenged more assertions that “Citizens for a Better Monticello” presented on their website. That ad ran on April 3, 2013. However, there was not another closed meeting to publish that ad because the council had decided to produce two ads in their closed session.

The Public Access Counselor’s non-binding resolution said the city council could redact information discussed regarding personnel issues about the city superintendent from the closed session, but suggested releasing the rest of the meeting minutes and recording.

Pratt said many people comply with the Attorney General and release suggested information.

Monticello Mayor Chris Corrie said last month before the June council meeting they planned on releasing the entire closed session meeting at their June 23 meeting. He noted the decision was solely up to the council.

He said the closed session meeting in March was about an hour and fifteen minutes.

“It’ll give the entire scope,” Corrie said. “I can’t say whether it’s the best thing to do or not, but it’s definitely something the council is going to want to look at.”

As of Thursday, July 10 the altered minutes and recordings had not been released to the public, but on June 25, the city clerk sent them to Holtz in response to a FOIA request she made two weeks prior to the city council meeting.

Nearly all of the minutes were blacked out, except a line that states Mayor Corrie reminded the council that no action could be taken from the meeting. But according the Public Access Counselor report, he did not follow his reminder as he signed the plan to create the ad.

The recording from the meeting released to Holtz was just over 23 minutes long. She shared the recording with CU-CitizenAccess.org. In the recording, the councilors discussed paying for the ad out of their own pockets—which they did —and what trouble it was to respond to all the FOIAs and complaints the Holtz and her husband were sending.

CU-CitizenAccess.org received a FOIA of the meeting minutes.

The councilors discussed whether the Holtz’s and Joe Brown were abusing the law for their own personal reasons including getting the city superintendent and the mayor fired.

“They are using this law as a weapon,” one of the councilors said in the recording.

“I don’t want to respond to them because it just gives them some credence,” another said. “But maybe it’s time.”

Mayor Corrie said last month that producing the ad was an effort to educate the public about information the city council felt was accurate.

“It stemmed from frustration about letters to the editor in the newspaper and Freedom of Information requests that seemed to grind our municipal offices to a halt,” Corrie said.

He said the city was constantly trying to improve compliance with the Open Meetings Act and the Freedom of Information Act and had come a long way since the time of the March meeting.

Holtz said based on all the redactions from the FOIA she received had, she would have to file another complaint with the Public Access Counselor.

“It’s concerning that one has to be so vigilant about our public officials,” Holtz said. “One would like to sit back and have faith that everybody is doing everything above board. I no longer have that faith.”